What Can Sleep Apnea Cause? 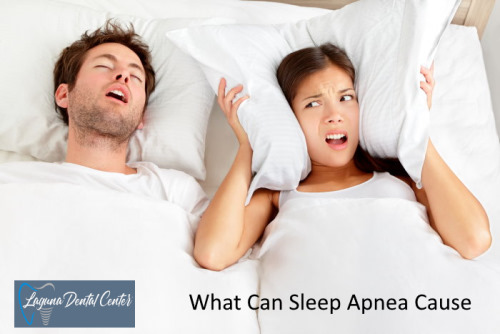 People who have sleep apnea cease breathing while they are asleep. Obstructive sleep apnea is the most prevalent kind of apnea (OSA). Soft tissues on the back of the throat might restrict the airway, causing OSA. Many persons with sleep apnea are unaware that their sleep cycle is disturbed all night since they do not completely awaken.

Your risk of high blood pressure, stroke, heart disease, and mortality increases if sleep apnea is left untreated. Obstructive sleep apnea can reduce your life expectancy by 12 to 15 years if untreated.

What Can Happen if Sleep Apnea Goes Untreated?

Cardiovascular disease, diabetes, and even glaucoma have all been related to sleep apnea, particularly when misdiagnosed or untreated. Your chance of dying may also rise as a result of sleep apnea.

This is problematic because atherosclerosis, which strains the cardiovascular system and raises the risk of a heart attack or stroke, is a condition in which plaque builds up in the arteries. Pancreatitis and type 2 diabetes can also be brought on by chronic inflammation.

Can You Die From Sleep Apnea?

Yes. Sleep apnea has been linked to several illnesses, including heart disease, thyroid disease, hypertension, and type 2 diabetes. A person with sleep apnea may die either directly from the sickness itself (inability to breathe) or indirectly from a variety of other illnesses because each of these medical conditions has the potential to cause death.

Can Sleep Apnea Cause Headaches?

Yes. People who have sleep apnea periodically cease breathing during the night. Usually, tissues in the throat totally or partially obstruct the airway. As a result of this occurring frequently, the air becomes trapped in the lungs. The circulation acquires carbon dioxide from the atmosphere, which expands the blood arteries in the brain. A headache could result from dilatation.

Yes, it can. The airway blockage caused by obstructive sleep apnea causes blood pressure to increase because it requires the heart to work harder to circulate oxygen-rich blood throughout the body.

When you have sleep apnea, your brain increases blood flow while you are asleep to essential organs like the heart and brain. Compared to what it would be if you were sleeping regularly and breathing normally, this puts more strain on the artery walls and elevates blood pressure.

Can Sleep Apnea Cause Weight Gain?

Yes, it can. Because of the breathing pauses caused by sleep apnea, the brain continuously awakens the body throughout the night. Lack of sleep causes a sleep debt that makes it more difficult for the brain to cope with stress and exacerbates any pre-existing anxiety issues.

Can Sleep Apnea Cause Anxiety?

Yes, it can. The breathing interruptions caused by sleep apnea cause the brain to wake the body during the night frequently. Lack of sleep leads to sleep debt, which makes it more difficult for the brain to handle stress and exacerbates any anxiety problems that may already be present.

Can Sleep Apnea Cause Seizures?

Yes. When they don’t get enough sleep or have sleep apnea, people with epilepsy may experience seizures.

Can Sleep Apnea Cause AFib?

Can Sleep Apnea Cause Tinnitus?

Can Sleep Apnea Cause Depression?

Yes. A lack of sleep is linked to depression because sleep and mood are connected. While some people suffer sleep deprivation first and subsequently depression, others experience both diseases’ symptoms at the same time. Risk factors for both illnesses might make them more likely to develop.

Can Sleep Apnea Cause Migraines?

Yes, It can. Some people may get migraine episodes or tension-type headaches due to sleep apnea. The development, intensity, and progression of migraines have been associated with sleep apnea.

Numerous health issues, such as difficulties focusing, depression, heart attack, and stroke, have all been related to sleep apnea. High blood pressure may also be influenced by sleep apnea. Thankfully, there are various treatment options for this condition, including a CPAP machine for sleep apnea.

Sleep apnea can affect your health and quality of life. Schedule an appointment today with Dr. Ronald Ayzin at Laguna Dental Center to learn more about sleep apnea treatment options.