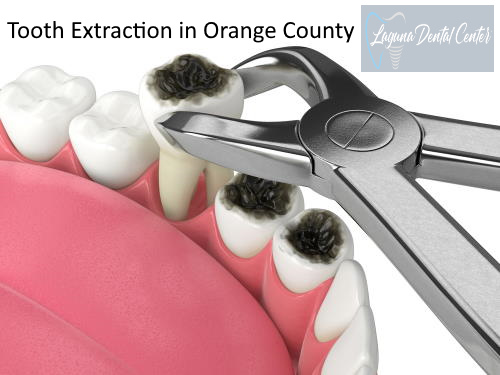 Tooth extraction is the dental procedure of pulling a tooth from the socket. Tooth extraction treats cases of impacted teeth, overcrowding teeth, and extensive tooth decay. Dr. Ronald Ayzin of Laguna Dental Center has been doing safe and effective tooth extractions since 2017. We are near you in Orange County, .

The cost of a tooth extraction procedure is affected by the type of tooth extraction, the anesthetic used, and the dentist’s or oral surgeon’s experience. Recovery lasts a few days and full healing takes about 3-4 weeks after getting a tooth removed. Post-infection statistics after tooth extractions are low at 1.4% according to the Prevalence of Postoperative Infection after Tooth Extraction: A Retrospective Study by Yue Yi et al. Adhering to your dentist’s aftercare instructions helps with quicker healing and recovery from an extracted tooth. Call (949) 704-6269 for more information about tooth extractions.

Do I Need to Have a Tooth Extraction – Orange County?

Tooth extraction is the process of removing a tooth from its socket. Tooth extraction is performed for cases of tooth decay, crowding, and impacted teeth. You should have your tooth pulled if you have any of the following conditions.

Is Getting a Tooth Extraction Painful?

Local anesthesia is administered to numb pain before extracting a tooth. Your level of comfort and the difficulty of the tooth extraction will determine the type of anesthetic used. You will only feel pressure and movement without pain while the tooth is being extracted. Acetaminophen or ibuprofen are examples of over-the-counter drugs that can be used to treat pain following tooth extraction. An ice pack applied to the area where the tooth was pulled reduces post-tooth extraction discomfort.

How Long is the Recovery After a Tooth Extraction Oral Surgery?

How Much Does a Tooth Extraction Cost in Orange County?

How Much Does Tooth Extraction Cost Without Insurance in Orange County?

How Much Does Tooth Extraction Cost With Insurance in Orange County?

What Factors Affect the Cost of Tooth Extraction in Orange County, CA?

The primary determinants of tooth extraction cost are the method of extraction and the type of anesthetic used. Simple extractions where a tooth is visibly present in the mouth are less expensive compared to surgical extractions. A surgical extraction is more difficult given that the tooth has not yet broken through the gum line. Sedation anesthesia like nitrous gas costs $50 to $60 for every half-hour of use. X-rays, dental exams, medications, and follow-up appointments are additional expenses related to Tooth Extraction Orange County procedure.

Why Should I Choose Dental Extraction Treatment with Dr. Ronald Ayzin at Laguna Dental Center Near Orange County?

Make an Appointment with Dr. Ronald Ayzin at Laguna Dental Center to see if you need a Tooth Extracted

Dr. Ronald Ayzin at Laguna Dental Center provides Tooth Extraction at a cost that our neighbors near Laguna Hills can afford. Call us at (949) 704-6269 to schedule an appointment. Learn more About Us.

Make an Appointment with Dr. Ronald Ayzin at Laguna Dental Center to see if you need a Tooth Extracted

* FREE Digital X-rays especially to see if an Extraction is needed ($150 Value).

Dr. Ronald Ayzin at Laguna Dental Center provides Tooth Extraction at a cost that our neighbors near Orange County can afford. Call us at (949) 704-6269 to schedule an appointment. Learn more About Us.

What Happens After a Tooth Extraction?

You will be given a piece of gauze to bite down to promote blood clotting at the tooth extraction site. It is normal to feel pain and discomfort after Extracting a Tooth. Post-tooth extraction pain is controlled with oral pain relievers and an ice pack. Your dentist for teeth extraction will provide you with thorough aftercare advice to aid in healing and recuperation after the procedure.

How is a Tooth Removed?

You will have a consultation with your dentist and get dental x-rays before having your tooth pulled. Local anesthesia is injected around the extraction site so there is no pain during the procedure. The dentist uses an elevator to loosen the tooth for a simple tooth extraction. Forceps are used to remove the tooth from its socket.

A small gum incision is made on the gums for surgical tooth extractions. The dentist may need  to cut the tooth or remove the bone surrounding it. Stitching is needed for people who need to have the gum lines closed after getting the tooth out.

How to Recover After a Tooth Extraction Surgery?

You should rest for a few days after having a tooth extracted. Follow your dentist’s advice to enable faster healing and recovery following your tooth extraction. In the next section, we have food and drinks that are allowed and not allowed after having Tooth Extraction Orange County surgery.

What Can I Eat After a Tooth Extraction?

Maintain a soft food diet and drink plenty of water within the first days after your tooth extraction. Here are foods that you can eat after getting a tooth removed.

What to Avoid Eating After a Tooth Extraction?

You should not eat hard, crunchy, and chewy foods that can disrupt the healing blood clot in your tooth socket. Here are foods to avoid following a tooth extraction.

Dental Extraction Near Me in Orange County