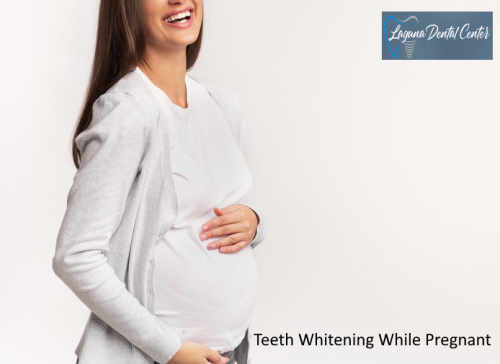 Teeth whitening is a common and inexpensive method for improving the appearance of stained or discolored teeth. Whitening your teeth involves bleaching them often accomplished using carbamide or hydrogen peroxide-containing treatments. This brightens the color. Only licensed dental experts can use the most potent and efficient whitening solutions.

Can teeth whitening be performed during pregnancy? No. Mainly if teeth whitening utilizes hydrogen peroxide or carbamide peroxide. Alternatively, use baking soda or other natural methods to whiten your teeth.

Are Teeth Whitening Safe When Pregnant?

No. Even though there is no data or evidence that Whiten Teeth harms pregnant women or their unborn children, the American Pregnancy Association (APA) suggests delaying professional tooth whitening until after pregnancy. It is preferable to avoid this dental procedure during pregnancy to prevent any issues, however little, for the fetus. You might discuss tooth whitening with your dentist after giving birth.

Can You Use Whitening Strips on Your Teeth When You’re Pregnant?

No. Most teeth-whitening preparations contain either hydrogen peroxide or carbamide peroxide. Both are available in at-home whitening strips and are utilized by dentists. Both of these are harmful to an unborn child.

BabyGaga, a website on pregnancy, states that professional treatments include 15% to 43% peroxide, whereas whitening strips typically contain between 3% and 20% peroxide.

Even though whitening strips contain less peroxide than professional teeth whitening solutions, pregnant women should not use them since these chemicals may harm the unborn child.

No. The manufacturer of Snow claims that it does not utilize peroxides and only employs LED light and serum prepared with natural components. Even though Snow contains elements believed to be healthy, it is advisable to avoid it until after giving birth.

Are Whitening Toothpaste Safe While Pregnant?

Yes, so long as they do not include hydrogen peroxide (read the product label). Most whitening toothpaste does not have peroxides; thus, they are safe for pregnant women. Whitening toothpaste is more potent than standard, yet it will not harm an unborn child.

Can Pregnant Women Whiten Their Teeth with Hydrogen Peroxide?

No. Pregnant women who whiten their teeth with hydrogen peroxide may be at risk. It is advised to use whitening treatments without peroxides (such as the best teeth whitening toothpaste) or wait till after pregnancy to utilize peroxide-containing whitening products.

During pregnancy, women might choose natural teeth-whitening methods. Here are some examples.

Bromelain, which is present in pineapple, whitens teeth naturally. Bromelain is an enzyme that can assist in removing germs from your teeth. The outcome is brighter, whiter teeth. Fresh pineapples have more bromelain than canned pineapples. Because it degrades rapidly, it is uncommon in dental goods.

When the coconut’s flesh is crushed, oil is extracted. When brushing your teeth with coconut oil, you use mechanical action to remove plaque and surface stains. Coconut oil is less effective at whitening teeth than expert treatments. Your teeth will retain their original hue. When the soft layer of plaque is removed, the teeth temporarily feel and appear cleaner.

Plaque-removing raw veggies such as celery, carrots, and broccoli can help whiten teeth. Due to the high water content of carrots and celery, your salivary glands must work harder to eliminate microorganisms. This makes your teeth seem and feel whiter and cleaner.

Are Teeth Whitening When Breastfeeding Safe?

No. In the same way that professional tooth whitening is not recommended during pregnancy, it is also not recommended during nursing. There is no evidence that tooth whitening would be dangerous for a breastfed infant. However, many teeth-whitening solutions include high quantities of peroxides, which might harm an infant if ingested by the mother. Additionally, peroxides enter the bloodstream. It is recommended to wait until you are no longer breastfeeding to have a professional whiten your teeth.

Can You Use Activated Charcoal Teeth Whitening while Pregnant?

No. Scientists have no concrete data that shows activated charcoal can be used to whiten teeth. Therefore, it is unknown if a pregnant lady may use it safely to whiten her teeth. Due to a lack of data, the American Dental Association (ADA) does not suggest using charcoal to whiten teeth, especially during pregnancy.

You should not use teeth-whitening techniques that involve chemicals that might enter your system while pregnant. Use natural products or wait until you are no longer pregnant or nursing to whiten your teeth at home or professionally.