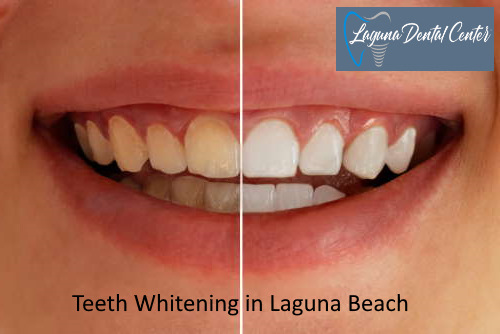 Teeth whitening is the process of lightening teeth using at-home commercial products and expert dental teeth whitening treatments. Teeth whitening removes stains left on teeth by substances like cigarettes, coffee, red wine, and berries. Dr. Ronald Ayzin of Laguna Dental Center has been helping patients achieve their confident bright smile with teeth whitening procedures since 2017. Our office is near Laguna Beach. Visit us for teeth whitening at a cost you can afford.

Do I Need Teeth Whitening in Laguna Beach?

Teeth whitening benefits people who have healthy teeth and gums without fillings or other restorations. Teeth whitening removes the stains and discoloration that develop on your teeth over time. The following individuals get the most from Teeth Whitening Laguna Beach procedures.

Some people are not recommended to whiten their teeth. The following conditions preclude people from being good candidates for tooth whitening.

How Much Do Teeth Whitening Cost in Laguna Beach?

Teeth Whitening Laguna Beach procedures cost between $650 to $1,100. The type of procedure, the whitening agents utilized, the severity of your teeth stains, and the dentist’s level of experience all have an impact on the overall cost of your teeth whitening treatment.

How Much Do Teeth Whitening Cost Without Insurance in Laguna Beach?

How Much is Dental Insurance Coverage for Teeth Whitening in Laguna Beach?

How Long Does Professional Dental Teeth Whitening Last on Average?

Schedule An Appointment with Dr. Ronald Ayzin at Laguna Dental Center can help you with Teeth Whitening.

Dr. Ronald Ayzin at Laguna Dental Center provides the best quality Teeth Whitening at a cost that our neighbors near Laguna Beach can afford.

What Does Teeth Whitening Mean?

Teeth whitening is the procedure of lightening the color and shade of natural teeth. Teeth whitening treatments are best done on healthy, unrestored, yellowed teeth. Both intrinsic and extrinsic tooth stains can be removed with Teeth Whitening. Extrinsic teeth stains appear on the surface of teeth due to dark foods, drinks, and tobacco products. Intrinsic teeth stains develop inside the teeth because of aging, trauma, exposure to minerals (tetracycline), and excessive fluoride consumption.

What are the Different Types of Teeth Whitening in Laguna Beach?

The color of teeth can be lightened using both at-home teeth whitening kits and professional dental whitening procedures. The most utilized ingredients for teeth whitening are hydrogen peroxide and carbamide peroxide. In this section, we will talk about the teeth whitening options that best suit your needs.

Professional teeth whitening trays are custom trays used to whiten teeth at home. Your dentist takes impressions of your teeth to produce molds of custom trays for you to take home.

Teeth whitening strips are commercial items used directly on the teeth to lighten teeth at home. Strips for teeth whitening have a lesser concentration of whitening agents which renders them ineffective for severely stained teeth. Only use teeth-whitening strips that have received American Dental Association (ADA) approval.

LED Teeth Whitening at the Dentist

The first step in professional teeth whitening at the dentist’s office is a consultation to establish the ideal shade for your teeth. A teeth-whitening gel is applied at 15–30 minute intervals with a laser or LED light during your Teeth Whitening Laguna Beach treatment. Teeth whitening treatments are often completed over a number of sessions. It is recommended that you consume foods and beverages such as coffee, red wine, fruit juices, and berries in moderation to keep your teeth white.

How Do Teeth Look Before and After Teeth Whitening?

We help you achieve the pearly white smile you’ve always desired. View the Before and After images of our patients who received teeth whitening treatments here at Laguna Dental Center near Laguna Beach.

What is the Best Method for Teeth Whitening?

The fastest and most efficient way to whiten teeth is through professional teeth whitening at the dentist. A single dental office teeth-whitening appointment only takes 45 to 1 hour. Teeth can become 6–8 shades lighter when hydrogen peroxide is used in conjunction with an LED or laser.

Teeth Whitening Services Near Me

Laguna Beach is a seaside resort city located in southern Orange County, California, in the United States. It is known for its mild year-round climate, scenic coves, environmental preservation efforts, and artist community. The population in the 2020 census was 23,032.

Historically settled by Paleoindians, the Tongva people, and then Mexico, the location became part of the United States following the Mexican–American War. Laguna Beach was settled in the 1870s, officially founded in 1887, and in 1927 its current government was incorporated as a city. The city adopted the council–manager form of government in 1944. The city has remained relatively isolated from urban encroachment by its surrounding hills, limited highway access, and dedicated greenbelt. The Laguna Beach coastline is protected by 5.88 miles (9.46 km) of state marine reserve and an additional 1.21 miles (1.95 km) of state conservation area.

Tourism is the primary industry with an estimated six million people visiting the community annually. Large annual events include the Pageant of the Masters, Festival of Arts, Sawdust Art Festival, Art-A-Fair, Bluewater Music Festival, and Kelpfest.

In October 1993, a fire in Laguna Beach destroyed or damaged 441 homes and burned more than 14,000 acres (5,700 ha). The National Fire Protection Association listed it as the seventh-largest loss wildland fire in the United States.

According to the United States Census Bureau, the city of Laguna Beach has a total area of 25.4 km2 (9.8 sq mi), of which 22.9 km2 (8.8 sq mi) are land and 2.5 km2 (0.97 sq mi) are covered by water. Its coastline is 7 mi (11 km) long and includes 27 beaches and coves. It is bordered by the Pacific Ocean on the southwest, Crystal Cove State Park and the city of Newport Beach on the northwest, Laguna Woods on the northeast, Aliso Viejo and Laguna Niguel on the east, and Dana Point on the southeast.

The land in and around Laguna Beach rises quickly from the shoreline into the hills and canyons of the San Joaquin Hills. The town’s highest point, at an elevation of 1,007 feet (307 m), is Temple Hill in the Top of the World neighborhood. Because of its hilly topography and surrounding parklands, few roads run into or out of town; only the Coast Highway connecting to Newport Beach to the northwest and to Dana Point to the south, and State Route 133 crossing the hills in a northeastern direction through Laguna Canyon. Parts of Laguna Beach border the Aliso/Wood Canyons Regional Park.

According to an analysis by NeighborhoodScout.com, Laguna Beach has a higher crime rate than the national average of communities of all population sizes in the United States. The chance of becoming a victim of a violent crime is 1 in 200 and of a property crime is 1 in 36.

Laguna’s foothill trails are known internationally for mountain biking. Mountain bike hall of fame legend Hans Rey makes his home in Laguna Beach, as do the Rads, pioneers of mountain biking going back to the 1970s. Source: (Wikipedia)