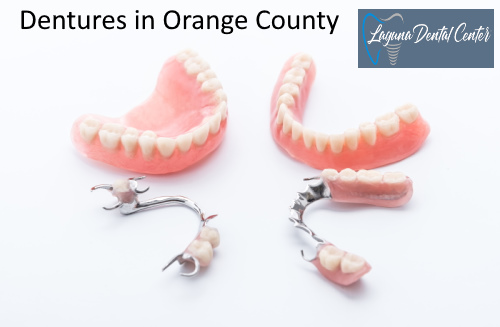 Dentures are removable dental prostheses that can be used to fix tooth gaps. Dentures are classified into two types: full sets and partial dentures. Dr. Ronald Ayzin at Laguna Dental Center has over 5 years of denture experience since 2017 and gives experienced advice on the best sort of complete dentures for you. According to The Journal of Prosthetic Dentistry, partial dentures have a maximum lifespan of 10 years. Call us if you have any queries regarding how much partial dentures cost near Orange County, California. Do you want to know if a dental bridge is good for you? We will address any concerns or questions you have to make the best decision regarding this procedure and whether a partial set of artificial teeth or a full set is appropriate for you.

Am I a good Candidate for Dentures in Orange County, CA?

Dentures are appropriate for patients who have lost a substantial number of teeth. In other circumstances, however, dentures may not be the ideal solution for patients. A list of candidates for dentures Orange County is provided below.

How long do dentures last at Laguna Dental Center?

According to the Journal of Prosthetic Dentistry, full dentures can last 5 to 10 years, while partial dentures can last 10 years with adequate care and maintenance. On the other hand, dentures can wear out and discolor faster than real teeth, and the tissues in your mouth can alter over time. The American Dental Association recommends replacing your dentures every 5 to 7 years for an appropriate fit and look.

For dentures treatment at Orange County, CA, Laguna Dental Center is the best choice. Here’s why.

Our facility is outfitted with cutting-edge technology, including 3D imaging software, allowing our professionals to create dentures Orange County with pinpoint accuracy. After evaluating your data, Dr. Ronald Ayzin will develop a treatment plan to assist you with your dentures dentist Dr. Ronald Ayzin has helped over 200 patients with dentures. We provide affordable dentures that are suited to your budget and schedule.

With Laguna Dental Center, your search for dentures treatment near Orange County, CA can end here. Schedule a consultation to see how your smile will appear with dentures. Look at the testimonies from our patients to learn why we are the finest alternative for dentures.

Dentures are fake teeth and gums that fit firmly over the gums to replace lost teeth caused by tooth disease, accident, or other oral disorders. Dentures Orange County are made to fit snugly against the gums, replacing missing teeth and removing any problems created by gaps.

What are the different types of Dentures?

There are two types of dentures: full dentures, and partial dentures. 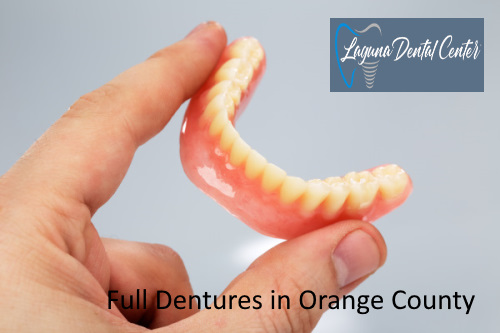 Full Dentures. Full dentures, also known as complete dentures, are a type of denture that covers the entire mouth rather than just a portion of it. Full dentures are removable prostheses that can be used to replace missing teeth in people who have lost all of their teeth.

Partial Dentures. Partial dentures are removable dentures that can replace a few lost teeth but not a whole upper or lower set of teeth. Partial dentures fill in the gaps left by periodontitis or other dental diseases, preventing the remaining teeth from suffering excessive pressure from misuse and producing oral health concerns.

Denture care Near Me in Orange County