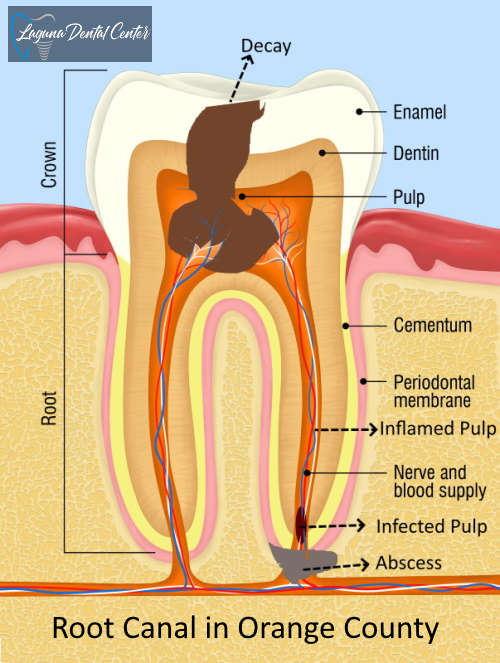 A root canal is a dental treatment done to save and restore teeth that have been infected and damaged. A root canal treats problems brought on by a tooth infection, such as pain, swelling, sensitivity, and tooth discoloration. Dr. Ronald Ayzin has extensive experience in root canal treatments since 2017. Get in touch with us at Laguna Dental Center to know more about the costs of a safe and effective root canal treatment near Orange County, CA.

Root canal treatment completed with fillings and crowns lasts up to 20.1 years according to the study Root Canal Treatment Survival Analysis in National Dental PBRN Practices by Thyvalikakath et al. The root canal procedure saves your teeth by removing the infected pulp matter. Your tooth is cleaned and disinfected prior to filling and sealing to protect your teeth for many years. Schedule your root canal appointment now if you are near us by calling (949) 704-6269.

Am I a Candidate for a Root Canal?

How Long Does a Root Canal Treatment on a Tooth Last?

The success rate of root canal procedures is at 95% according to Medicinenet. It is recommended to have permanent restoration after a root canal treatment to ensure your teeth are protected for years. Teeth treated with a root canal that received both filling and crown last an average of 20.1 years according to the Root Canal Treatment Survival Analysis in National Dental PBRN Practices study by Thyvalikakath et al.

How Long Does Root Canal Last With No Crown?

Root canal treatment with no crown lasts for about 6.5 years according to the Root Canal Treatment Survival Analysis in National Dental PBRN Practices study by Thyvalikakath et al. Practicing proper dental hygiene after a root canal is important in keeping your teeth healthy and free from damage.

Can I See Results From Root Canals Done at Laguna Dental Center?

Your teeth are saved and preserved for a long time when you have root canal therapy from a reputable dental office. Check our patients’ root canal Before and After pictures here at Laguna Dental Center.

How Much Does Root Canal Cost in Orange County, CA?

How Much Does Root Canal Cost Without Insurance in Orange County?

How Much Does Root Canal Cost With Insurance in Orange County?

How Much is a Root Canal With Crown?

The price of a root canal and crown range between $900 to $4,000. The tooth’s location, the extent of the procedure, and the kind of crown to be used all affect the total cost of a root canal with a crown.

What Factors Affect the Cost of Root Canal in Orange County, CA?

Diagnostics, anesthetics, and aftercare treatment are factors that influence the total cost of root canal therapy. An x-ray is necessary to assess the level of decay in the infected tooth. A local anesthetic is administered to numb the treatment area during a root canal. Aftercare includes pain medications and other follow-up treatments to make sure you are comfortable while recovering from a root canal.

Here at Laguna Dental Center we give personalized treatment and dental care all under one roof. Our dental office has the latest modalities including a 3D scan to thoroughly assess your infected tooth for root canal. Dr. Ronald Ayzin has been treating patients for root canal since 2017. Dr. Ronald Ayzin and the team continue to attend extensive training and courses to remain up-to-date with the best practices in dental care and treatment. Book your root canal treatment near Orange County CA with us today.

Make an Appointment with Dr. Ronald Ayzin at Laguna Dental Center to See if You Need a Root Canal

Make an Appointment with Dr. Ronald Ayzin at  Laguna Dental Center to See if You Need a Root Canal

* FREE Digital X-rays especially to see if a Root Canal is needed ($150 Value).

A root canal is a safe and effective procedure for saving teeth from damage and infection. Below is the step-by-step process of getting a root canal at Laguna Dental Center.

What to Expect After a Root Canal?

What Can I Eat After a Root Canal?

Maintain a soft food diet for the first 2-3 days after your root canal. Do not drink and eat hot and cold foods and beverages. Chew on the side opposite your root canal treatment.

These are the food and drinks that are safe to consume following a root canal treatment.

Should I Visit Dr. Ronald Ayzin After My Root Canal Procedure?

What is a Root Canal Procedure?

Root canal (endodontic treatment) is a procedure used to save badly damaged teeth from infection. A root canal dentist or endodontist removes the infected tooth pulp and then cleans and disinfects the tooth. The tooth is filled and sealed to avoid reinfection after Root Canal Treatment.

What are the Stages of Root Canal Therapy?

Getting a root canal procedure has 6 stages.

Root Canals Near Me in Orange County

At Laguna Dental Center, we value your oral health. We want to give you a smile you’ve always wanted in an atmosphere that you’ll feel very comfortable with. We also offer Root Canals Near Orange County. If you are in or near Orange County, CA, our team of Root Canal dentists and friendly staff will be here to assist you with your pre and post- Root Canal care. Our Staff will ensure you have a speedy recovery and a permanent smile. Schedule a consultation today!