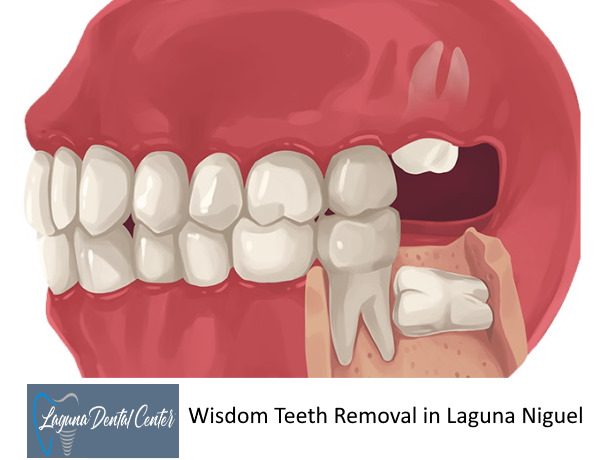 Wisdom teeth removal is a dental procedure that extracts wisdom teeth completely from their sockets. The wisdom teeth are the third molars that are the last to come out at the back of the mouth. When impacted or misaligned wisdom teeth cause discomfort, tooth decay, and damage to nearby structures and require removal. Have a convenient and safe wisdom teeth extraction here at Laguna Dental Center near Laguna Niguel, CA. You are in good hands with Dr. Ronald Ayzin who has an extensive experience in wisdom teeth removal surgery since 2017. Reach out to us for the costs of wisdom teeth removal and schedule your appointment today.

Is Having Wisdom Teeth Removal Painful?

Pain prior to wisdom teeth removal is typical when your wisdom teeth have already triggered inflammation, infection, and damage to neighboring teeth and soft tissues. Wisdom tooth pain indicates that you require immediate surgery to remove your wisdom teeth.

You receive a local anesthetic to numb the extraction site before having your Wisdom Teeth Removal Laguna Niguel treatment. You do not experience any pain throughout the procedure, only pressure or tugging as the wisdom tooth is pulled. Inform your wisdom teeth removal dentist or oral surgeon as soon as pain arises during the procedure.

How Much Does Wisdom Teeth Removal Cost in Laguna Niguel, California?

Costs for removing wisdom teeth range from $75 to $250 per tooth. The cost to remove an impacted wisdom tooth ranges from $200 to $600. A portion of the costs of wisdom teeth extraction is covered by your dental insurance.

How Much Does Wisdom Teeth Removal Cost with General Anesthesia Sedation in Laguna Niguel?

How Much Does Wisdom Teeth Removal Cost with Insurance in Laguna Niguel?

Your out-of-pocket costs for wisdom teeth removal range from $100 to $850 if you have insurance. Different dental plans are offered by insurance companies. The majority of dental insurance pays 50% of the cost of a Wisdom Teeth Removal Laguna Niguel procedure.

How Much Does Wisdom Teeth Removal Cost without Insurance in Laguna Niguel?

Why Should I Choose Wisdom Teeth Removal Surgery with Dr. Ronald Ayzin at Laguna Dental Center near Laguna Niguel?

Make an Appointment with Dr. Ronald Ayzin at Laguna Dental Center to See if You Need Wisdom Teeth Removed

Dr. Ronald Ayzin at Laguna Dental Center provides Wisdom Teeth Extraction at a cost that our neighbors near Laguna Hills can afford. Call us at (949) 704-6269 to schedule an appointment. Know more About Us.

Make an Appointment with Dr. Ronald Ayzin at  Laguna Dental Center to See if You Need Wisdom Teeth Removed

Dr. Ronald Ayzin at Laguna Dental Center provides Wisdom Teeth Extraction at a cost that our neighbors near Laguna Niguel can afford. Call us at (949) 704-6269 to schedule an appointment. Know more About Us.

The procedure of removing wisdom teeth restores the overall health of your oral structures. Here are the 4 steps in getting your Wisdom Teeth removed.

Apply an ice pack and take oral painkillers prescribed by your dentist for wisdom teeth removal to treat pain post-surgery. Stick to soft foods like pudding, soup, and yogurt for the first few days following the extraction. Avoid vigorous rinsing or spitting in order to prevent disturbing the blood clot at the extraction site.

Remove Wisdom Teeth Near Me in Laguna Niguel

Laguna Niguel is a city in Orange County, California, in the United States. The syllables “Laguna” (Spanish for “lagoon”) and “Niguili” combine to form the name Laguna Niguel (the name of a Native American village once located near Aliso Creek). There were 64,355 people living there as of the 2020 census. Laguna Niguel is surrounded by the cities of Aliso Viejo, Dana Point, Laguna Beach, Mission Viejo, and San Juan Capistrano and is situated in the San Joaquin Hills in the southeast portion of Orange County, near to the Pacific Ocean.

When the Laguna Niguel Corporation bought the Rancho Niguel Mexican land grant in 1959 to create one of California’s first master-planned communities, Laguna Niguel was born. Laguna Niguel, which has a high concentration of homes, acts as a bedroom community for the job hubs in central and northern Orange County. The typical household income of Laguna Niguel is over double the national average and is 31% higher than that of Orange County. It is renowned for its abundant parks and open trails, pleasant coastal climate, low crime rate, and warm coastal climate.

Being surrounded by the San Joaquin Hills, Laguna Niguel has a predominantly hilly landscape. The city’s Niguel Hill, which rises to a height of 936 feet (285 m) in the southwest corner, is 400 feet (120 m) above sea level. The average elevation is near sea level. Along with Laguna Beach and Dana Point to the south, Aliso Viejo, Mission Viejo, and San Juan Capistrano are nearby cities. It’s bordered on the west by Wood Canyons Wilderness Park and the sizeable Aliso Unincorporated Area.

The climate of Laguna Niguel is nice throughout the year, like like much of Southern California’s coastline. The hottest and coldest months are, on average, August and December. In 1963, the temperature reached a high of 108 °F (42 °C), and it reached a low of 21 °F (-6 °C) recorded in 1949.

Since Laguna Niguel is a bedroom community, most inhabitants go outside of the area to work in places in central and northern Orange County, like Irvine and Newport Beach. Within Laguna Niguel, the service sector employs the majority of people.

Orange County is well-known for Laguna Niguel’s large park and trail network. A vestige of the original 1959 Gruen plan, over one-third of Laguna Niguel is public open space, which is split between 31 city parks and 4 county parks.

The 2020 United States Census reported that Laguna Niguel had a population of 64,239.

As a bedroom community, most residents commute outside of Laguna Niguel to central and north Orange County cities, such as Irvine and Newport Beach. Most jobs within Laguna Niguel are in the service industry.

Laguna Niguel is known throughout Orange County for its extensive park and trail system. Over one-third of Laguna Niguel is public open space, a legacy of the original 1959 Gruen plan, and is divided between 31 city parks and 4 county parks. Source: (Wikipedia)