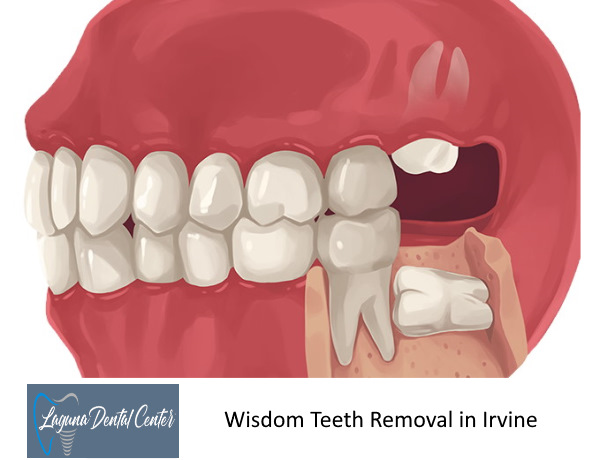 Wisdom teeth removal is a dental procedure that extracts wisdom teeth completely from their sockets. The wisdom teeth are the third molars that are the last to come out at the back of the mouth. When impacted or misaligned wisdom teeth cause discomfort, tooth decay, and damage to nearby structures and require removal. Have a convenient and safe wisdom teeth extraction here at Laguna Dental Center near Irvine, CA. You are in good hands with Dr. Ronald Ayzin who has an extensive experience in wisdom teeth removal surgery since 2017. Reach out to us for the costs of wisdom teeth removal and schedule your appointment today.

Is Having Wisdom Teeth Removal Painful?

Pain prior to wisdom teeth removal is typical when your wisdom teeth have already triggered inflammation, infection, and damage to neighboring teeth and soft tissues. Wisdom tooth pain indicates that you require immediate surgery to remove your wisdom teeth.

You receive a local anesthetic to numb the extraction site before having your Wisdom Teeth Removal Irvine treatment. You do not experience any pain throughout the procedure, only pressure or tugging as the wisdom tooth is pulled. Inform your wisdom teeth removal dentist or oral surgeon as soon as pain arises during the procedure.

How Much Does Wisdom Teeth Removal Cost in Irvine, California?

Costs for removing wisdom teeth range from $75 to $250 per tooth. The cost to remove an impacted wisdom tooth ranges from $200 to $600. A portion of the costs of wisdom teeth extraction is covered by your dental insurance.

How Much Does Wisdom Teeth Removal Cost with General Anesthesia Sedation in Irvine?

How Much Does Wisdom Teeth Removal Cost with Insurance in Irvine?

Your out-of-pocket costs for wisdom teeth removal range from $100 to $850 if you have insurance. Different dental plans are offered by insurance companies. The majority of dental insurance pays 50% of the cost of a Wisdom Teeth Removal Irvine procedure.

How Much Does Wisdom Teeth Removal Cost without Insurance in Irvine?

Why Should I Choose Wisdom Teeth Removal Surgery with Dr. Ronald Ayzin at Laguna Dental Center near Irvine?

Make an Appointment with Dr. Ronald Ayzin at Laguna Dental Center to See if You Need Wisdom Teeth Removed

Dr. Ronald Ayzin at Laguna Dental Center provides Wisdom Teeth Extraction at a cost that our neighbors near Laguna Hills can afford. Call us at (949) 704-6269 to schedule an appointment. Know more About Us.

Make an Appointment with Dr. Ronald Ayzin at  Laguna Dental Center to See if You Need Wisdom Teeth Removed

Dr. Ronald Ayzin at Laguna Dental Center provides Wisdom Teeth Extraction at a cost that our neighbors near Irvine can afford. Call us at (949) 704-6269 to schedule an appointment. Know more About Us.

The procedure of removing wisdom teeth restores the overall health of your oral structures. Here are the 4 steps in getting your Wisdom Teeth removed.

Apply an ice pack and take oral painkillers prescribed by your dentist for wisdom teeth removal to treat pain post-surgery. Stick to soft foods like pudding, soup, and yogurt for the first few days following the extraction. Avoid vigorous rinsing or spitting in order to prevent disturbing the blood clot at the extraction site.

Remove Wisdom Teeth Near Me in Irvine

Irvine is a master-planned city in South Orange County, California, United States in the Los Angeles metropolitan area. The Irvine Company started developing the area in the 1960s and the city was formally incorporated on December 28, 1971. The 66-square-mile (170 km2) city had a population of 307,670 as of the 2020 census.

Irvine borders Tustin to the north, Santa Ana to the northwest, Lake Forest to the east and southeast, Costa Mesa to the west, and Newport Beach to the southwest. Irvine also shares a small border with Orange to the north on open lands by the SR 261.

Late spring and early summer in Irvine is subject to the June Gloom phenomenon widespread in southern California, with overcast mornings and occasional drizzle. Late summer and autumn are warm and mostly dry, with occasional bouts of humid weather extending from Pacific hurricanes off the west coast of Mexico. Winters are mild, with most winters having no frost, and can be hot and dry when the Santa Ana winds blow.

In 2016, Irvine became the largest city in the continental United States with an Asian American plurality, constituting around 45% of the city’s population. The 2010 United States Census reported that Irvine had a population of 212,375. The population density was 3,195.8 inhabitants per square mile (1,233.9/km2).

Every October, Irvine hosts the Irvine Global Village Festival to celebrate the diversity among the citizens of Irvine and Orange County. The festival consists of exhibits from local merchants, entertainment from diverse cultures, and sampling of foods from various regions of the world. The event used to be held at Colonel Bill Barber Marine Corps Memorial Park but has since then been moved to the Orange County Great Park. Source: (Wikipedia)